IS HOW THE OPERATOR OPERATES THE CRANE CAUSING DAMAGE TO THE CRANE? 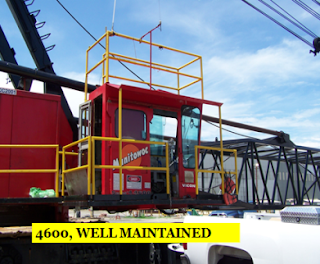 Here is a 4600 Manitowoc Vicon (Variable Independent Converter), used in lift crane service. With a different type boom and without the torque converter, they are a preferred “dirt machine” because of their rugged machinery and single line drum hoisting capacity. Also, they have large disc swing frictions well suited for the wear and heat of “duty cycle” work as in clamshell operations requiring constant rotating of the crane between the pick-up and depositing of the material.

The typical clamshell bucket below shows the three lines that control the movement of the load from one location to another. The tag line is under tension at all times from its take-up reel. It keeps the bucket in line with the crane and reduces swinging somewhat. 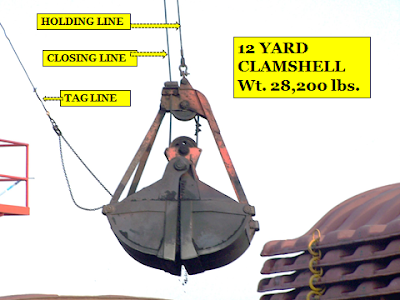 Okay then, from all that you can see that a lot of skill is necessary on the part of the operator. Also, there are a lot of variables that affect the actual force on the crane. First, there are static weight and then dynamic (motion) force. How quickly you start and stop influence these forces. One other element to clamshell work is the sudden release of the load causing impact loading.

Now, is the operator smooth or jerky? Does he work within the rated capacity of the crane? Taking into account the shock loading of bucket work, manufactures down grade their ratings by a minimum of 20%. What about the size (in cubic yards) of the bucket on the crane, correct or larger? Is he beyond the maximum radius causing the crane become unstable? These cranes are tough, but they have their limits. Here we see obvious signs of severe shock loading indicated by the pulling out of the rope from the wedge sockets! 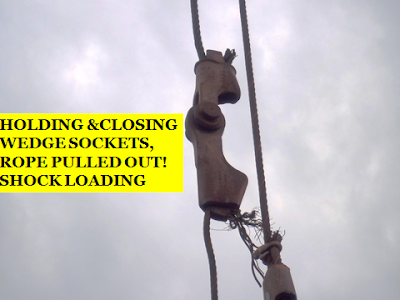 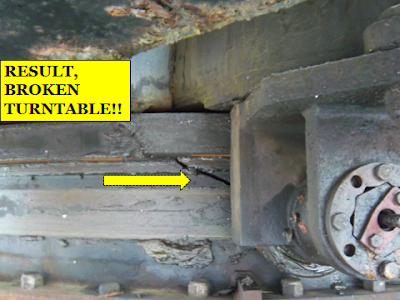 These cranes have their limits! After repeated mishandling the upper works broke away from the lower pedestal. We rarely see this severe damage on a turntable with minimum wear. Let’s review how it was being worked. You heard the old saying “being road hard and put away wet”, well that applies here. The operator was jerky on the controls that shock load the crane. This was done on a regular basic and over some time. There were indicators to the operator and the crane owner that problems with the crane operations were damaging the crane. 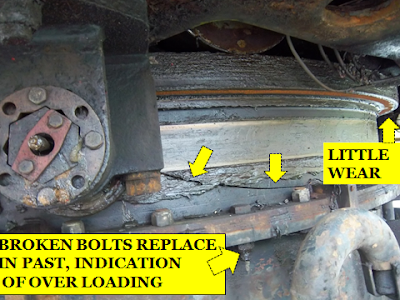 And “the rest of the story” as Paul Harvey would say, is this. The bolts pointed two in the photo to the right were replaced many times with harder bolts should have been a tip off that something was wrong. This is the connection between the crane’s upper works and the pedestal mounted on a dock, so the crane is firmly held in place. This installation gives the operator a false feeling of confidence then he would otherwise get from an overloading a crane. Results of this “cowboy” operation is crane damage and the potential loss of load which could lead to death or injury of workers.

Did they learn from this or are they living in denial? What do you think?

Posted by National Crane at 9:54 AM No comments: