Synthetic Ropes, "to be or not to be " on Mobile Cranes - that is the question

What the crane industry has experienced in the past is fiber roped being easily cut when they are used as slings, blocks, and tag lines. Fig. 1 There is an established “belief” this material is too soft to be used on multipart reeving. It’s said that facts and words do little to alter a belief, experiences are what one trusts. Crane owners have required the installed synthetic rope be removed from their crane based on this weakness belief. Yet, no evidence of damage was evident. 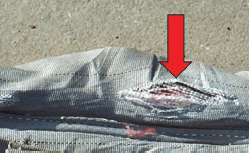 The popularity of synthetic ropes on cranes is growing just by the number of companies offering the product. They call it in sales terms, “market push” The Heavy Lift off-shore Oil industry is a major user of these products due to their reduced weight.

The benefits of synthetic rope over steel are lighter weight, more flexibility, anti-spin, and no need for lubrication to prevent corrosion. Some synthetic rope manufacturers claim a fourfold increase in rope life, thereby reducing operating costs – a true advantage if proven. The benefit of reduced weight has caught the attention of the crane industry.

Let’s do a little arithmetic. Let’s assume the weight of eight parts of 7/8” steel wire rope at 1.42 pounds per foot at a 100’ hook height (1.42 x 8 x 100 = 1,136 pounds) add a 3,800 pounds load block. Now have 4,936 pounds suspended over the crane’s boom point. Replace the steel rope with synthetic rope, as pictured in Fig. 2, will see a reduction of the weight of the rope by 80%. The weight of the block will also be further reduced because the overhaul weight requirement will be approximately 65% of its original weight. The new total weight in the hypothetical situation is approximately 1,352 pounds, a 3,584 pound reduction. This weight decrease really gets crane manufacturers excited, especially the ability to reduce weight at the boom point. Also, note the nylon point sheaves a further weight reduction over steel. 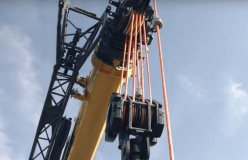 At various locations the Navy, Grove, and others have conducted trial tests of synthetic ropes on cranes, and the performance of the rope was reported satisfactory. I question how safe it is to trust a synthetic rope that can be cut with a knife, to lift 80-ton loads? Especially since I have witnessed synthetic ropes damaged when used for rigging slings and tag lines. How will the rope last in “real” job activities?

When a crane is operated and used conservatively, the synthetic rope should be as reliable as steel ropes. That is the rub. When we factor humans into the equation, things get complicated, job pressures increase. What “predictable misuse” should be expected. I think of the ABBA song “Take a Chance on Me.” Do I take a change when not knowing if the crane will be properly operated and maintained some months down the line? I believe that synthetic rope needs the “test of time” to show the crane community how it survives in the real-world struggles of a modern job site.

As printed in the December 2019 issue of Wire Rope News and Sling Technology.

Dennis can be emailed at dennis@natlcrane.com.
Posted by National Crane at 12:26 PM